Chick-Fil-A Part 2: About the Whole “Sanctity of Marriage” Thing

Posted on August 4, 2012 by Nathan Hevenstone

This is part 2 of a 3-part series on Chick-Fil-A. Part 1 dealt with the whole “free speech” thing. Part 3 will be dealing with why I’ve personally made the decision to no longer spend my money at that bigoted, homophobic fast-food restaurant.

Here’s a link to a pretty damn good summary on Wikipedia. After the fold, I will continue as if you have read that link and/or have a pretty decent understanding of what, exactly, is going on.

Since at least January of 2011, the owners of Chick-Fil-A have been pretty open about their views on same-sex marriage. Now the president of Chick-Fil-A has come out talking about the “sanctity of marriage” and so on. With at least a year or more of words and actions that show a very homophobic bent, many (myself included) have decided to boycott Chick-Fil-A. In response, Mike Huckabee declared August 1 “Chick-Fil-A” appreciation day.

During this time, hundreds of thousands of Christians (and non-Christians) lined up outside Chick-Fil-A stores all over the county to buy bigotry meals and homophobe drinks. And while doing this, they complained about two things: “free speech” and “the sanctity of marriage”. I’m focusing on the latter for this post.

Can some please explain to me what, exactly, the “sanctity of marriage” is? I don’t get it.

I’m studying to be a cultural anthropologist. I’ve looked at marriage throughout cultures and throughout history, and the only real definition I can come up with is “a coupling of two or more people for various different reasons”.

The Bible doesn’t help, either, as it tends towards polygamy in the Old Testament and staying single and chaste for life in the New Testament.

Here… let’s look at some examples of “traditional marriage” starting in 1691: 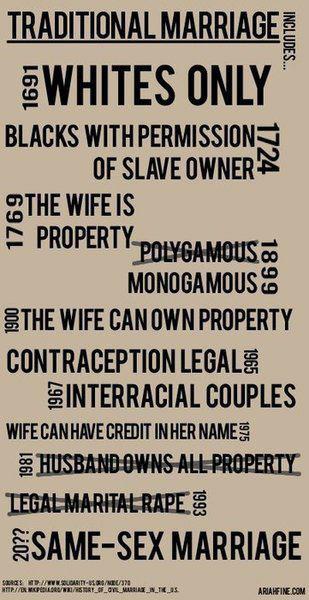 So again… what is “traditional marriage” and why is it so sacred?

See, to me, there is no “traditional marriage”. Thus, there’s no “sanctity” that has to be “protected”. It’s homophobia, pure and simple.

9 Responses to Chick-Fil-A Part 2: About the Whole “Sanctity of Marriage” Thing

Did you read the post and all the comments? Cancel reply